It comes as no surprise that America’s writers and poets of the 19th century touched heavily on Biblical themes. They were, after all, overwhelmingly Christian. Far more surprising, and scarce, are instances of their references to Rabbinic Literature.

In this regard, a relatively obscure short story by Edgar Allen Poe, A Tale of Jerusalem, stands entirely in a league of its own. The breadth of familiarity with Rabbinic Literature and Temple protocol, the extent to which this narrative is so replete with abstruse Talmudic references, is, frankly, astounding. Poe goes far beyond mere Talmudic reference; he actually adopts its idiom and syntax, employing free use of Hebrew and Aramaic to color his characters.

Much has been written about this story, which was first published in  1832 in the Philadelphia Saturday Courier  and later in 1845 in the Broadway Journal.

The narrative, which I urge you to read in full, is one that is familiar to many students of the Talmud. It appears, with slight variations, three times in the Babylonian Talmud (Sotah 49b. Bava Kama  82b, and Menachos 64b) and  once in the Jerusalem Talmud (Ta’anis 23a). In summary, it recounts how, during a siege of Jerusalem, there was a shortage of animals for offering as a daily sacrifice in the Temple. To allow Temple sacrifice to continue, an agreement was reached between the two sides. Those inside Jerusalem would lower a basket with gold coins down the city walls, and those outside the city would take the money and replace it with an animal for the Temple sacrifice, which would then be hauled up to the temple. Eventually, the forces outside of Jerusalem reneged on the agreement and, instead of sending up an animal fit for sacrifice, they sent up a pig. In the words of the Talmud, “when the pig reached the halfway mark of Jerusalem’s walls, it embedded its [hooves] into the wall and the entire Land of Israel shook 400 by 400 Parsoth”. This incident heralded a deterioration of Jewish  national and spiritual integrity which culminated years later in the destruction of the Temple.

Poe’s version of the story follows 3 young Kohanim, priests, as they rush to the city walls to ensure that this transaction is completed in time for the daily morning offering in the Temple. Poe, echoing the Talmudic version of the story, describes how they eagerly send down the money, and pull up the now-heavy basket in anticipation of finding “a fattened calf from the pastures of Bashan”. To their horror and dismay, what they pull up instead was a pig, “a hog of no ordinary size”!

This post is not here to discuss the many issues that come up in scholarly discussion about this story, such as the date it occurred, who the warring forces were, and its relationship to the Batla HaTamid of the 17th of Tamuz. That question has been addressed by commentators on the Mishna and Talmud, along with contemporary historians. We hope to contribute a post on this topic as we approach 17 Tamuz.

The question which we would like to address is this: how did Edgar Allen Poe, an American gentile of the early 19th century, know about this Talmudic passage and all of the other Talmudic references contained in his story?

The overwhelming and irrefutable scholarly consensus is that Poe was masterfully parodying a four-volume behemoth of 18th century British literature, a historical fiction set in the second Temple Era called Zillah: A Tale of the Holy City. The novel, authored by English  writer Horace Smith in 1779, follows a young girl, Zillah, the daughter of the deputy Kohein Gadol, high priest, on a whirlwind of colorful adventure. In it, Smith displays an encyclopedic familiarity with Rabbinic Literature. It is awash with narratives and factoids from throughout the Mishna, Talmud, and other assorted ancient Rabbinic works. Any student of Jewish texts will greatly appreciate and enjoy the work, which is freely available online.

Poe’s narrative does, in fact, appear as a passing reference in Zillah (Vol. 1 pg. 219), and there is little doubt that Poe had simply reworked it for his purposes. Poe was merely echoing or parodying a work written several decades earlier, and the subject of the question of mysterious gentile Talmudic scholarship would be Horace Smith, not Edgar Allen Poe.

However, in 2006 and 2008 posts in the Seforim Blog, Dan Rabinowitz concedes this point only partially, and asserts that “Poe was still more familiar with this story than [merely from reading] Zillah”. He primarily bases this claim on the following passage in Poe’s A Tale of Jerusalem: 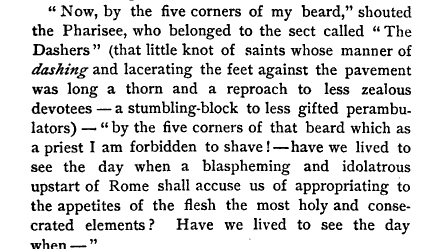 Some background: one of the 3 Kohanim who serve as the tale’s main characters is named Simon the Pharisee (the other two are Abel Phittim and Buzi-Ben-Levi). In this passage, Simon takes indignant offense at Roman suggestions that the Jews would use this arrangement to feed themselves, instead of supplying the Temple altar. The passage refers to the sect he belongs to as “the Dashers”.

Rabinowitz sees in this detail a proof of Poe’s singular, and independent, familiarity with Rabbinic literature. “This”, posits Rabinowitz – twice – in the Seforim Blog. “Is a play on the talmudic description of the priests – that they are quick – kohanim zerizim heim”.

There are two major problems with this inference made by Rabinowitz from Poe’s reference to “the Dashers”:

1) Kohanim zerizim heim is an encomium which is applied to all Kohanim; there is no evidence to suggest that it belonged to a particular “sect” within the priestly class. Since all three of the story’s characters are kohanim, it would be strange for Poe to apply it to only one of them. He specifically calls the Dashers a “little knot of saints”, hardly a broad term for all Kohanim. Assuming, as Rabinowitz suggests, that Poe was himself Talmudically knowledgeable,  it seems unlikely that he would employ the use of a sect of “the Dashers” as a reference to “Kohanim zerizim heim”.

2) More significantly, I would like to posit that Rabinowitz misconstrued Poe’s use of the term “Dashers”.  There are two possible definitions for the verb “Dash”. True, to “Dash” can mean to be zerizim,  swift to “move with violence; rush, as in the horses dashed out of the burning stable”. However, it can equally be referring to a different definition: “To strike with violence, as in the waves dashed against the cliffs” (per Dictionary.com). Which one seems more logical from the text? Here it is again:

When you juxtapose “dashing” and “lacerating”, the latter definition seems to be Poe’s intent.

In that case, you ask, who, in fact, is this “knotty sect” of “Dashers” that Poe speaks of?

To answer that one merely has to look at the name of this character, Simon the Pharisee. Who were the Pharisees? The short answer is that they were the sector of the Jewish population of the time which adhered to Rabbinic teachings and followed a life dictated by Rabbinic law. They tended to be very scrupulous about fulfilling minutiae of Halacha and rejected the Sadducee negation of the oral law in place of the written law. Although they were the preferred movement of the Jewish masses, Pharisees were underrepresented in the Saducee-heavy class of Kohanim, priests. It is for this reason that Poe specifies that this Kohen, Simon, was known as a Pharisee.

The Pharisees were known to have certain sects of pseudo-ascetics, people who outwardly acted with all types of outlandish and extreme forms of piety, but who were, in fact, merely carrying on a charade. These people made use of Pharisee-influenced stringencies to justify and serve as a cover for their impiousness. In fact, the Mishna Sotah (3:4) records a teaching of Rabbi Yehoshua that “the plague of Pharisees brings destruction upon the world” (see here for a discussion re translating Parushim as Pharisees). Rabbi Yehoshua, a “Pharisee” himself, was referring to these people. As the Gemara explains (Sotah 22b), the “plague of Pharisees” refers to 7 sects who acted with ersatz piety to trick the masses into thinking that they were extremely devout. The Talmud lists each of the seven sects, but only one of them concerns us: the Nikfi sect. What was the fake piety of the Nikfi Pharisees? The Talmud teaches us that they “knocked their feet together”. Elaborates Rashi: “they would walk with [extreme] humility, with their ankles alongside their large toe (meaning with very small steps), resulting in their toes knocking against the stones”. From the context, it is clear that the Nikfi Pharisee was someone who walked with a certain style of extreme humility which resulted in his feet “knocking” – or Dashing – against the stones (resulting in lacerations, the desired physical manifestation of this extreme piety).

This, then, is Poe’s reference to the sect of “the Dashers”  to which Simon the Pharisee belonged. It refers not to kohanim zerizim heim, as suggested erroneously by Rabinowitz, but to the Nikfi Pharisee of Sotah 22b. When Poe called them dashers he did not mean, as Rabinowitz suggests, that they are swift and move with celerity, but that they knock and dash and lacerate and hit their feet against stones in a show of false piety.

That said, Rabinowitz also erred on another account. He claims that, despite the fact that Poe  largely based  A Tale of Jerusalem on Zillah, he also added in information which proves that he, Poe, was something of a Talmudic scholar in his own right.  His main proof, as stated above, was Poe’s reference to Simon’s sect of “Dashers”, which, as we’ve shown, he erroneously writes was referring to kohanim zerizim heim. While we have shown that he was referring to an entirely different reference in the Talmud, this doesn’t in any way detract from Rabinowitz’s claim that Poe’s Talmudic knowledge extended beyond Zillah.

However, now that we have identified Poe’s “Dashers” sect as the Nikfi Pharisees, we can also conclusively reject the premise of Rabinowitz’s question: “Did Poe study Talmud?” This is only a question if, in fact, Poe displays knowledge which doesn’t appear in Zillah. The following passage, from the fourth volume of Zillah (pg. 144) proves that Nikfi Pharisees do, in fact, appear quite clearly:

This passage is an unmistakable reference to the gemara in Sotah 22b, and, most significantly, it clearly and undeniably translated Nikfi as Dashing!

In conclusion, it is demonstrably clear that Poe’s “knotty sect” of “Dashers” refers to Nikfi, and not, as Dan Rabinowitz claims in the Seforim Blog, kohanim zerizim heim. Additionally, again contrary to Rabinowitz’s assertion, there is absolutely no shred of evidence to suggest that Edgar Allen Poe was independently knowledgeable of Rabbinic Literature. In fact, the very evidence Rabinowitz marshalls appears explicitly in Smith’s Zillah, a work that Poe clearly used in A Tale of Jerusalem. So, for those scouring archives for an answer to Rabinowitz’s question of “did Poe study Talmud?”, I would instead suggest directing creative energies toward a more serious question: how and why did Horace Smith study Talmud?

Beyond all of the above, there is no doubt that each of us see various “knotty sects” of modern-day pseudo-Pharisees (and, for that matter, Sadducees) plaguing our own communities. Further: each of us internally battles inauthentic influences within our own religious personalities. It is often very difficult to be objective about sincerity of purpose within religion. While I am not suggesting we shouldn’t each voice an opinion and put forth a strong vision for modern Jewry, it behooves us to do so while recalling the clarion call of that great Pharisee, Hillel Hazakein: “That which is hateful to yourself, do not do to a fellow man. That is the whole Torah; the rest is commentary. Go and study it”. (Shabbos 31a)